In 1885, he married Lydia Heavysege Marsh

He died at the Town Hall Tavern [3rd July 1893]. Probate records show that he left effects valued at £394 4/6d, and probate was granted to John Marsh [cab driver] and Harriet Marsh [spinster].

After his death, his son John took over at the Town Hall Hotel

In 1885, she married (1) Schofield Hainsworth. They had no children.

They had no children.

After John’s death, she carried on as licensee of the Puzzle Hall Inn, Sowerby Bridge.

She submitted plans for the tower at the Puzzle Hall Brewery.

Probate records show that he left effects valued at £363.

Probate was granted to his widow Mary Ann.

Probate was granted to son Herbert and daughter Laura Annie.

He was licencee at Puzzle Hall, Sowerby Bridge [1905].

He was a brewer and beer seller, living on his own account at Puzzle Hall [1911].

On 24th October 1912, he died after falling off the roof of the Inn whilst carrying out repairs 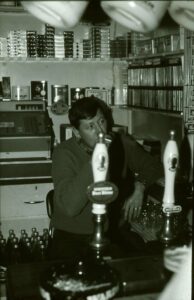 Nick was/is a computer expert, however he now seems to have moved into high class audio systems.
Check out his company website Longdog Audio